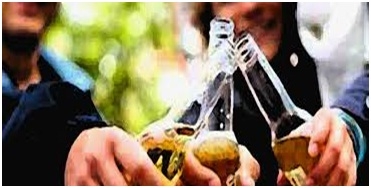 It is a universal fact that alcohol is harmful to health. Instead of knowing the fact, people drink alcohol heavily. Thousands of people in this world are heavy drinkers of alcohol. The use so much of excess that in spite of knowing all the disadvantages, they are unable to stop the excessive use of alcohol. Alcohol is a similar addiction like smoking. People get addicted to it once and it becomes almost impossible for them to quit alcoholism. Alcohol is made up of dirty stuff such as rotten grapes and other items therefore; it doesn’t contain any benefits within it. However, the lives of the alcohol users are at high risks.

As the fields in science have flourished within no time, the dangers associated to this dreadful addictions are also no more hidden. Every other person knows that alcohol can cause severe health problems. The problems include cirrhosis of the liver and injuries sustained in automobile accidents. These are not the only health danger associated to the consumption of alcohol. There are more than sixty diseases associated to alcohol by the researchers today. It is believed by the doctors that alcohol harms all parts of the body and we are totally unaware of it.

The article discusses diseases that are linked to heavy alcohol usage which may be or may not be known by every alcohol user.

Anemia is the disease which can cause the number of oxygen-carrying red blood cells to be abnormally low. This occurs due to drinking high alcohol. This disease can cause a number of problems such as fatigue, lightheadedness and shortness of breath. These are the major symptoms of Anemia. Many alcohol drinkers suffer from this disease and the symptoms every day. These symptoms cannot be considered less dangerous as they have the tendency to cause deaths.

It is believed by the doctors and even proven by the researchers that the habit of drinking doubles the risk of cancer. According to the scientists, the risks increase when the alcohol is converted into acetaldehyde by the body. It is a potent carcinogen. The body parts which can be caught by cancer with the excessive use of alcohol are mouth pharynx, larynx, esophagus, liver, breast, and colorectal region. The risks of cancer increases when the alcohol users are even addicted to the tobacco use. The results can be dreadful in such cases.

Cirrhosis is developed with the use of high amount of alcohol presence in the body. Alcohol is tremendously poisonous to the cells in the liver. The condition refers to the malfunctioning of liver. The live is so much scarred by drinking alcohol that it stops functioning. Not every drinker develops cirrhosis. It’s not easy to predict that which drinker is suffering from the disease. Doctors say that the drinkers who use alcohol to much are equally unlikely to suffer from cirrhosis whereas people who do not drink are equally like to catch the disease.

These are some of the health risks associated to the heavy usage of alcohol.

Respiratory System – How To Keep It Healthy

Seizures And Epilepsy – How To Get Through Intial Stages

Seizures And Epilepsy - How To Get Through Intial Stages