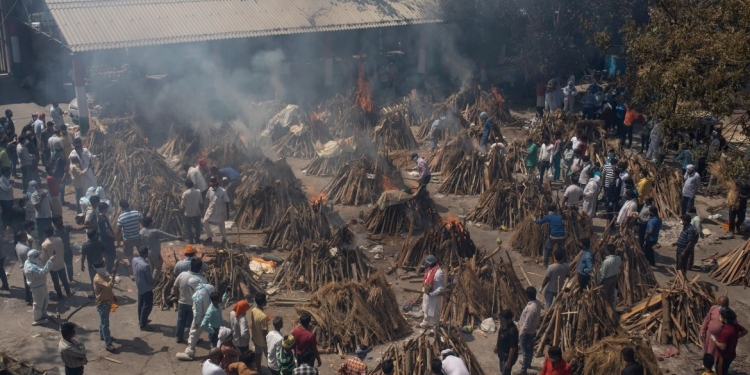 India’s unfolding coronavirus crisis is most visceral in its overwhelmed crematoriums and graveyards.

India’s unfolding coronavirus crisis is at its most visceral in the overwhelmed graveyards and crematoriums as bright, glowing funeral pyres light up the night sky in its worst-hit cities.

Outside crematoriums in cities like the capital New Delhi, which currently has the highest number of daily cases, ambulance after ambulance waits in line to cremate the dead.

Delhi has been cremating so many bodies that authorities are getting requests to start cutting down trees in city parks for kindling as a record surge of COVID-19 collapses India’s tattered healthcare system.

The nation of nearly 1.4 billion people set a global record of new daily infections for a fifth straight day on Monday. The 352,991 new cases pushed India’s total past 17 million, behind only the United States.

Deaths rose by 2,812 in the past 24 hours, bringing total fatalities to 195,123, the health ministry said, though the number is believed to be a vast undercount.

The head gravedigger at New Delhi’s largest Muslim cemetery, where 1,000 people have been buried during the pandemic, said more bodies are arriving now than last year.

In the central city of Bhopal, some crematoriums have increased their capacity from dozens of pyres to more than 50. Yet there are still hours-long waits.

At the city’s Bhadbhada Vishram Ghat crematorium, workers said they cremated more than 110 people on Saturday, even as government figures in the city of 1.8 million put the total number of virus deaths at just 10.
“The virus is swallowing our city’s people like a monster,” said Mamtesh Sharma, an official at the site.

The unprecedented rush of bodies has forced the crematorium to skip the individual ceremonies and exhaustive rituals that Hindus believe release the soul from the cycle of rebirth.

“We are just burning bodies as they arrive,” said Sharma. “It is as if we are in the middle of a war.”

One woman mourned the death of her younger brother, aged 50. He was turned away by two hospitals and died waiting to be seen at a third, gasping for air as his oxygen tank ran out and no replacements were to be had.

She blamed Prime Minister Narendra Modi’s government for the crisis. “He has lit funeral pyres in every house,’’ she cried in a video shot by The Caravan magazine.

Improve Your Well-Being With Kiwi Fruit