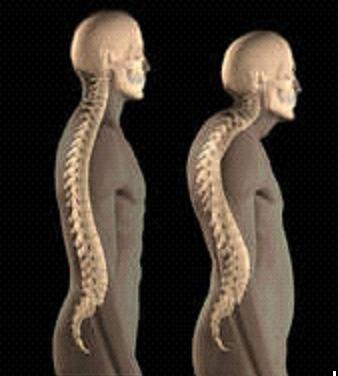 Spine has several curves in its structure. These curves provide support to people by absorbing the loads that spine has to bear due to the body weight. When these curves bend forward abnormally, the condition is known as kyphosis. Although slight bending of the spine is common but when the bend in significant, it is termed as kyphosis. Despite the fact that kyphosis is common in older people, it can occur at any age. Infants and young adults usually suffer from kyphosis if their spine is malformed.

What Are The Symptoms Of Kyphosis?

The only major symptom of kyphosis is a significantly round back. However, the following symptoms may evolve in some cases:

In very severe cases, victims may suffer from difficulty in breathing.

Vertebrae makes up the spine and kyphosis occurs when vertebrae becomes wedge-shaped. This transformation of shape could be caused due to the following factors:

In teenagers, a problem of postural kyphosis usually occurs. In this type of kyphosis, the upper spine becomes curved due to slouching.

What Are The Complications Of Kyphosis?

The following complications may arise in kyphosis:

How Is Kyphosis Diagnosed?

Depending on the severity of kyphosis and evolving symptoms, one or more of the following may be required to diagnose kyphosis properly:

Not all the above mentioned tests and exams are required to diagnose kyphosis. If the condition is not very serious, a single test may make kyphosis clear.

How Is Kyphosis Treated?

Since kyphosis can have several causes, the treatment is different for each type. Before suggesting an appropriate treatment, doctors will observe the cause and symptoms. The following treatments, however, are generally recommended:

A proper treatment may prevent any complications from arising.