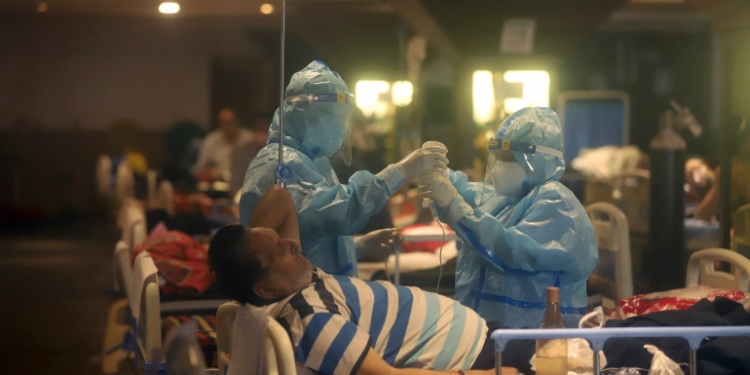 India recorded more than 4,000 Coronavirus Deaths in a day for the first time as more states imposed lockdowns in a desperate bid to halt the devastating new COVID-19 surge.

Health experts, who have expressed doubts about the official death toll, say the new wave may not hit a peak until the end of May, and there have been mounting calls for tough nationwide measures. Morgues and crematoriums have struggled to handle the number of dead, and makeshift funeral pyres burn in parks and car parks.

Prime Minister Narendra Modi has been criticised for his handling of an acute oxygen shortage, though the government says it is doing all it can. Tamil Nadu state Chief Minister MK Stalin said in a letter to Modi late on Friday that Tamil Nadu’s medical oxygen demand could double in the next two weeks. “The availability of oxygen in Tamil Nadu is very, very critical,” Stalin said, adding 13 patients died in a hospital on the outskirts of Chennai because of the lack of oxygen.

Rahul Gandhi, leader of the opposition Congress Party, called on Modi to order a national lockdown or the spread could be “devastating” for India and other countries. The government, stung by criticism of its handling of the crisis, has largely left individual state administrations to handle pandemic clampdowns.

While major cities such as New Delhi and Mumbai have been boosted by extra supplies of oxygen – much of it from abroad – and new hospital beds opened up, the southern states of Tamil Nadu, Karnataka, and Kerala all ordered lockdowns to counter an explosion in COVID cases.

Karnataka ordered a statewide two-week lockdown from Monday in a bid to halt the spread of the virus. The state added more than 48,000 cases in a day with Bengaluru, home to many Indian and global information technology giants, bearing the brunt.

One doctor in Bangalore said he has had to reject patients “left, right and centre” as his hospital struggled to find more oxygen. “The problem is the demand is so high that we need constant oxygen,” said Dr Sanjay Gururaj, medical director at Shanti Hospital and Research Center. The hospital is sending a truck twice a day to oxygen plants on the outskirts of the city to bring back 12 jumbo oxygen cylinders.

“In normal times, this would have lasted over two weeks – now, it lasts just over a day,” he added.
The city of nine million people, which saw 1,907 coronavirus deaths in April, has recorded more than 950 in just the first seven days of May. A lack of oxygen and critical care beds is being blamed for the dramatic rise in the death rate.

“The magnitude of cases from last year to now is vastly different,” he said, adding increasing numbers have meant more hospitalisations and more strain on healthcare systems with hospitals running nearly full.

Coronavirus cases and deaths have also shot up in West Bengal state since last week’s election, which was marked by huge rallies organised by Modi and his archrival, state Chief Minister Mamata Banerjee.
The main city, Kolkata, also has a critical shortage of oxygen and beds. The Hindu nationalist government imposed a three-month nationwide lockdown last year that helped halt the spread of the first major wave, but also caused huge economic damage.

There are fears the new surge could undermine the recovery in Asia’s third-largest economy. The growing death toll has added to pressure for the government to act, however. Opposition leader Gandhi said in his letter to the prime minister “your government’s lack of a clear and coherent COVID and vaccination strategy … has placed India in a highly dangerous position.”

Modi had “to understand India’s responsibility in a globalised and interconnected world” as “home to one out of every six human beings on the planet”. “Allowing the uncontrollable spread of this virus in our country will be devastating, not only for our people, but for the rest of the world.”