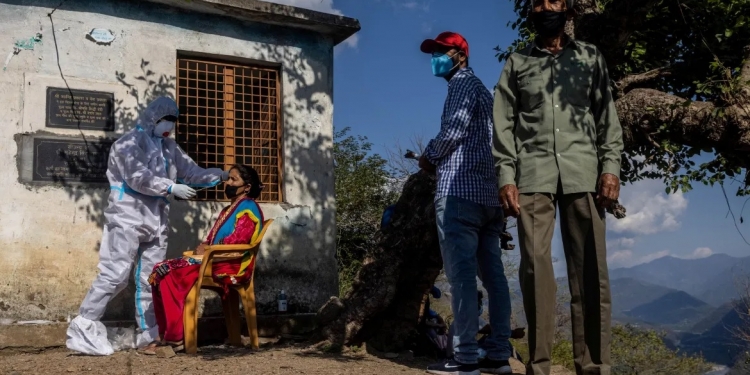 Many in India’s remote villages shun tests for fear of testing positive and being forced to go to hospital far from home.

Pramila Devi’s shrouded body lay on a bier, resting on a rock on the banks of a muddy Ganges.

The 36-year-old mother of three children died the previous night in a village in the mountainous northern state of Uttarakhand, a day after testing positive for COVID-19.

Devi’s death on Sunday is a sign of how poverty, fear and a lack of facilities are adding to COVID-19 fatalities in remote villages, where many shun tests for fear of testing positive and being forced to go to a hospital far from home.

Devi’s eldest daughter got married and moved away in late April after the family hosted a ceremony attended by over two dozen people, her husband Suresh Kumar, 43, told Reuters news agency.

Two weeks after that, Devi suffered a bout of diarrhoea. But it was not until 10 days later that Kumar, who has no income and depends on handouts, took her to a nearby dispensary that has been turned into a small COVID-19 facility with four beds.

The dispensary is equipped with one oxygen cylinder and one concentrator, said Aishwary Anand, the only doctor there.

Devi tested positive for COVID-19 with very low blood oxygen levels. Anand advised Kumar to take her to a bigger hospital, but costs were a deterrent.

The couple returned home, where their two other children – a 16-year-old boy and a 10-year-old girl – were waiting.

The next day Devi’s nephew carried her to a creaky taxi which returned her to the dispensary. Another patient was using the oxygen cylinder and the oxygen concentrator did not work due to a power outage.

“We need power,” Anand pleaded with an electricity department employee over the phone, as he paced the dispensary wearing white protection gear.

Eventually, power was restored, Devi had access to the concentrator and felt well enough to return home. But when she felt sick again, the family called an ambulance to take her back to the clinic, where she was pronounced dead on arrival.

“I am yet to inform my eldest daughter of her mother’s death,” a distraught Kumar said as he crouched on the banks of the Ganges.

The state of Uttarakhand, which shares its border with China and Nepal, reported nearly 46,000 COVID-19 cases and more than 6,000 fatalities.

But locals and doctors say many in the state suffering COVID-like symptoms refuse to get tested or test too late.