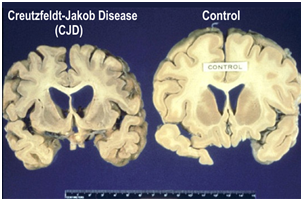 What is Creutzfeldt-Jakob Disease?

Creutzfeldt-Jakob disease (CJD) is a rare, degenerative, invariably fatal brain disorder. It affects about one person in every million people worldwide every year; In the United States, there are about 300 cases per year. CJD appears mostly in later life and runs a fast course.

Creutzfeldt-Jakob Disease is caused by a protein called a prion. A prion causes normal proteins to fold abnormally. This affects other proteins’ ability to function.
CJD is very rare. It occurs in about 1 of every 1 million people.

There are several types of Creutzfeldt-Jakob Disease. The classic types are:

Only a brain biopsy or an examination of brain tissue after death (autopsy) can confirm the presence of Creutzfeldt-Jakob disease, accurate diagnosis can be based on your medical and personal history, a neurological exam, and certain diagnostic tests.
In  addition, these test helps in detecting CJD

There’s currently no cure for Creutzfeldt-Jakob Disease, so treatment aims to relieve symptoms and make the affected person feel as comfortable as possible.
This can include using medication such as